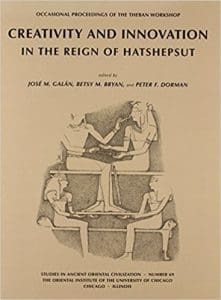 This volume publishes the proceedings of the Theban Symposium that took place in May 2010, in Granada, Spain, at the Institute for Arabic Studies of the Spanish National Research Council (CSIC), on the general theme of “Creativity and Innovation in the Reign of Hatshepsut.” The volume contains nineteen papers that present new perspectives on the reign of Hatshepsut and the early New Kingdom. The authors address a range of topics, including the phenomenon of innovation, the Egyptian worldview, politics, state administration, women’s issues and the use of gender, cult and rituals, mortuary practices, and architecture.

Groundbreaking for the study of Hatshepsut’s reign and the beginning of the Eighteenth Dynasty, this volume will become an important reference for scholars and lay readers interested in the history, culture, and archaeology of the time of Hatshepsut and the early New Kingdom.