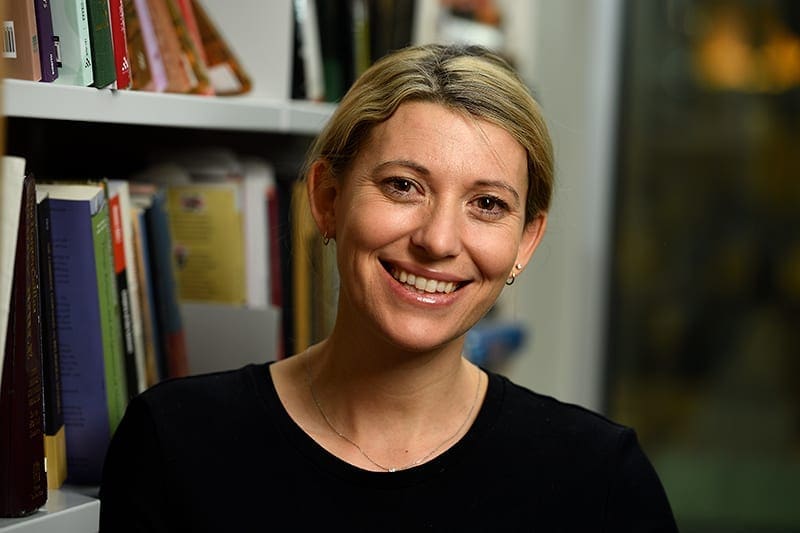 Alice Mandell was trained in the Hebrew Bible and Northwest Semitics by UCLA’s Department of Near Eastern Languages and Cultures. From 2016-2018, Alice was an Assistant Professor in the Department of Classical and Ancient Near Eastern Studies at the University of Wisconsin-Madison. In 2018, Alice transitioned to Johns Hopkins University, where she is currently the Albright Chair of Biblical and Ancient Near Eastern Studies. She teaches courses in biblical literature, Northwest Semitics, the history of the ancient Levant, and sociolinguistic approaches to the study of writing.

Alice is currently completing her book manuscript, Cuneiform Culture and the Ancestors of Hebrew. This work is part of Seth Sanders’ new series for Routledge: The Ancient Word: New Discoveries in Religion and Language from the Biblical and the Near Eastern World. She analyses scribal practices in the Canaanite Amarna Letters using sociolinguistic theory. She is also collaborating with Giorgio Buccellati (UCLA) on a translation of the Amarna Letters for the Society for Biblical Literature’s series, Writings from the Ancient World. This book will offer a critical apparatus and an in-depth discussion of the rhetorical strategies of individual letters.

Alice also has several projects that examine literacy practices in the ancient Levant, which include the use of writing in contexts of ritual and performance. She is working with Jeremy D. Smoak (UCLA) on two books that apply theoretical approaches from the study of religion in the Iron Age Levant. The first book, Inscribing the Spaces of the Dead in Ancient Judah: An Introduction to Writing and Ritual Space, considers the multimodality and socio-spatial setting of tomb texts. They are also working on a book that will introduce a more general audience to recent work on materiality and spatial theory in the study of Israelite religion. Once these works are all in press, she will complete a commentary on 1-2 Kings for Cambridge.