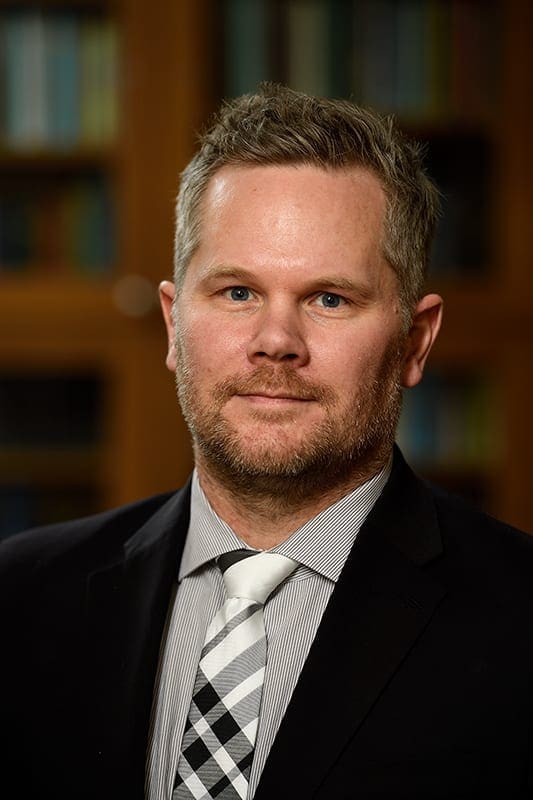 Michael Harrower is an archaeologist whose research concentrates on long-term histories of civilizations in Africa and Arabia. His research has concentrated on spatial, political, and ideological dynamics of water, and most recently focuses on ancient trade. Methodologically, he is a specialist in Geographic Information Systems (GIS) and satellite imagery mapping.

His fieldwork in Oman and Ethiopia included a NASA-funded study of long-term water histories using a combination of archaeological survey (exploration) and satellite imagery analysis. In Ethiopia, investigations have concentrated on pre- through late-Aksumite (1,000 BC to 700 AD) settlement patterns, and excavations of the newly discovered ancient town of Beta Samati. In Oman, his research has involved wide-ranging archaeological survey along with satellite imagery mapping of copper and chlorite (softstone) resources, production, and trade networks.

Professor Harrower’s core teaching responsibilities include archaeology of the ancient world up to the rise of cities and civilizations (World Prehistory), along with analytical techniques, concepts, and epistemology in archaeology (Archaeological Method and Theory).  His teaching also concentrates on spatial archaeology (including applications of satellite imagery and various computer mapping technologies), geoarchaeology, archaeology of water, and the archaeology of Africa and Arabia.  Courses Harrower regularly teaches at Johns Hopkins include:

Nomads, Tyrants, and Kings: Water in the Ancient Near East

Please visit the Spatial Observation Lab for Archaeological Research (SOLAR) website for a listing of publications. Landscape History of Hadramawt: The Roots of Agriculture in Southern Arabia