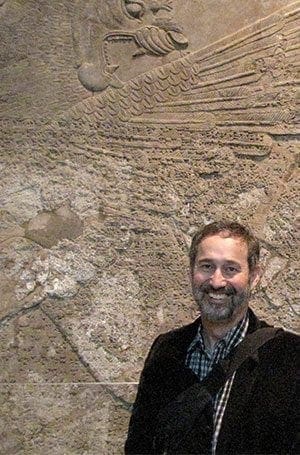 Blum-Iwry Professor of Near Eastern Studies

Lewis is the author of The Origin and Character of God: The Religion of Ancient Israel through the Lens of Divinity (Oxford University Press) which received the 2020 Frank Moore Cross Award from the American Schools of Oriental Research for “the most substantial volume related to the history and/or religion of the ancient Near East and Eastern Mediterranean, " (http://www.asor.org/news/2020/11/awards/), the 2021 Award for Excellence in the Study of Religion: Historical Studies from the American Academy of Religion (https://aarweb.org/AARMBR/Publications-and-News-/Newsroom-/News-/2021/2021-AAR-Book-Awards.aspx) and the 2021 Biblical Archaeology Society Biennial Publication Award for the Best Book Relating to the Hebrew Bible (https://www.baslibrary.org/biblical-archaeology-review/47/7/29). He is also the author of Cults of the Dead in Ancient Israel and Ugarit (Harvard Semitic Monographs) and co-author of Ugaritic Narrative Poetry. He is the General Editor of the multi-volume Writings from the Ancient World series published by SBL-Press (https://www.sbl-site.org/publications/Books_WAW.aspx).

Lewis’s research focuses on the religions of ancient Israel and Syria. In addition to the texts of the Hebrew Bible, he works with alphabetic cuneiform texts from Ugarit (Syria), our most important archival material for understanding the religion of the Late Bronze Age Levantine world. His work on ancient Aramaic covers all of the known texts written in the various Old Aramaic and related (e.g. Sam’alian) dialects that constitute our primary sources for understanding the early history of the Arameans.

Lewis concentrates his work on two core issues: (a) understanding the Hebrew Bible as an ancient Near Eastern text, and (b) studying Israelite and Syrian religion through both text and archaeology. His research has found him writing on a variety of topics ranging from Assyrian war crimes to Zerubbabel's failed bid to be the messiah of Israel, not to mention ancestor veneration, apotropaic figurines, Archaic Aramaic, Astarte, Bar Rakib, blasphemy, blood rituals, the Book of Job, covenant, cults of the dead, divinity, family religion, the iconography of the gods, incantations, Kuntillet Ajrud, mythology, political ritual at Ugarit, royal power and persuasion, the scapegoat ritual, textual criticism, Ugaritic poetry, and underworld deities. His teaching has won him the Excellence in Faculty Graduate Teaching and Mentoring Award from Johns Hopkins Krieger School of Arts and Sciences.

"The Fascination, Challenges, and Joys of Being a Historian of Ancient Israelite Religion," The Bible and Interpretation (online), August 2020

“The (Historical) Origin of God” The Ancient Near East Today (online), IX.3, March 2021 [The American Schools of Oriental Research] The Origin and Character of God: Ancient Israelite Religion Through the Lens of Divinity Writings from the Ancient World Cults of the Dead in Ancient Israel and Ugarit