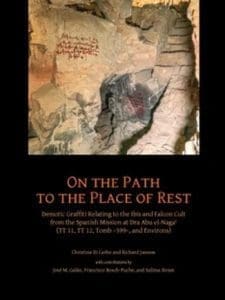 In this volume Christina Di Cerbo and Richard Jasnow publish 92 Demotic graffiti, along with several ostraca and mummy bandages, from Theban Tombs 11, 12, Tomb-399-, and environs recorded and studied under the aegis of the Spanish Mission at Dra Abu el-Naga directed by Jose Galan. These texts from the mid-second century BCE were inscribed on the tomb walls by workers of the Ibis and Falcon cult, who used the New Kingdom tombs as burial places for mummified birds dedicated to the gods Thoth and Horus. This varied corpus of texts includes not only votive formulae and lists of names, but, most unusually, labels for chambers and halls to guide the men depositing the mummies through the labyrinthine catacombs. The cult workers also recorded important burials and memorialized events of special significance, as when a massive conflagration broke out that consumed several mummies and damaged the tomb walls. The Missions conservators recovered many hitherto virtually invisible graffiti. Numerous inscriptions posed daunting epigraphic challenges; the text editors employed computer applications, especially DStretch, in order to enhance the digital images forming the basis for decipherment. In an introductory chapter Galan discusses the work of the Spanish Mission at Dra Abu Naga and recounts the complicated history of this important area of the Theban Necropolis down to the Roman period. The graffiti illustrate how New Kingdom tombs were reused for the sacred animal cult in the Ptolemaic period. Francisco Bosch-Puche and Salima Ikram contribute a detailed chapter analyzing the archaeological context of the graffiti and the material evidence for the animal cult in the site. The volume, a holistic study of this area at the twilight of Pharaonic history, represents a true collaboration between archaeologists and philologists.