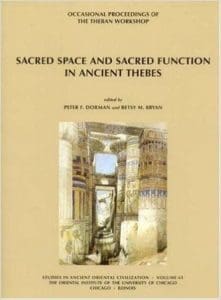 This volume presents a series of papers delivered at a two-day session of the Theban Workshop held at the British Museum in September 2003. Due to its political and religious prominence throughout much of pharaonic history, the region of ancient Thebes offers scholars a wealth of monuments whose physical remains and extant iconography may be combined with textual sources and archaeological finds in ways that elucidate the function of sacred space as initially conceived, and which also reveal adaptations to human need or shifts in cultural perception. The contributions herein address issues such as the architectural framing of religious ceremony, the implicit performative responses of officiants, the diachronic study of specific rites, the adaptation of sacred space to different uses through physical, representational, or textual alteration, and the development of ritual landscapes in ancient Thebes.