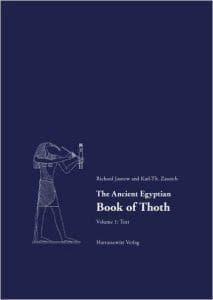 =The composition, which the editors entitle the “Book of Thoth”, is preserved on over forty Graeco-Roman Period papyri from collections in Berlin, Copenhagen, Florence, New Haven, Paris, and Vienna. The central witness is a papyrus of fifteen columns in the Berlin Museum. Written almost entirely in the Demotic script, the Book of Thoth is probably the product of scribes of the “House of Life”, the temple scriptorium. It comprises largely a dialogue between a deity, usually called “He-who-praises-knowledge” (presumably Thoth himself) and a mortal, “He-who-loves-knowledge”. The work covers such topics as the scribal craft, sacred geography, the underworld, wisdom, prophecy, animal knowledge, and temple ritual. Particularly remarkable is one section (the “Vulture Text”) in which each of the 42 nomes of Egypt is identified with a vulture. The language is poetic; the lines are often clearly organized into verses. The subject-matter, dialogue structure, and striking phraseology raise many issues of scholarly interest; especially intriguing are the possible connections between this Egyptian work, in which Thoth is called “thrice-great”, and the classical Hermetic Corpus, in which Hermes Trismegistos plays the key role. The first volume comprises interpretative essays, discussion of specific points such as the manuscript tradition, script, and language. The core of the publication is the transliteration of the Demotic text, translation, and commentary. A consecutive translation, glossary, bibliography, and indices conclude the first volume. The second volume contains photographs of the papyri, almost all of which reproduce their original size.